You are at:Home»Boat Reviews»New Monte Carlo 52: A Smart Luxury Cruiser

The all-new Beneteau Monte Carlo 52 is a luxury three-stateroom, two-head cruiser that’s made for easy living on board whether underway or on the hook. With a completely new design by Nuvolari & Lenard and Andreni Design, the yacht is filled with light, space and social areas all around.

Power comes from twin 480-hp Volvo IPS650 pod drives. Top speed is 28 knots; at 8 knots, range is more than 500 nm. The Monte Carlo 52 is filled with nice touches: One is that there’s a third helm station on the starboard side of the cockpit, with controls for the engines and the bow thruster, and the IPS joystick, for easy docking and low-speed maneuvering; docking stern-to could hardly be easier.

Most owners (and their guests) will probably spend a lot of time in the cockpit area. It’s protected from the elements by the overhang from the flybridge above. There’s L-shaped seating at the stern with another seat forward on the port side. The teak table converts to a sun pad.

You reach the large teak swim platform via steps on the starboard side, and you can lower it by pushing a button to create a lower private beach, or launch a RIB or a Williams MiniJet. Lift a cover on the transom and you’ll find an electric grill and sink, guaranteeing that this will be a popular space for entertaining. 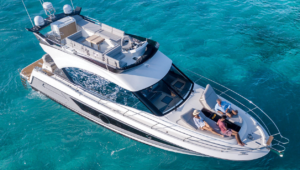 One nice touch is that the stairs leading from the cockpit up to the flybridge are spiral and easy to use. This not only is a safety feature, but it also frees up more space on the aft deck.

The flybridge is another likely gathering spot; it’s huge, extending almost two-thirds of the length of the boat. An L-shaped seat is on the starboard side, opposite the upper helm station. Just aft is a lounging area for eight, with a U-shaped sofa around a teak table. On the port side, another sofa extends all the way to the aft deck. Father aft, there’s another small galley with an electric grill, sink, and icemaker. You can open the sunroof overhead by pushing a button.

On the bow, a teak seat is between the two sections of the bow rail. Two sun pads flank the skylight to the VIP stateroom below. You lift up the back of the pads to create chaise lounges.

The salon is filled with natural light from large windows all around. The galley is aft and fully fitted for cruising. It comes with Corian counters, a three-burner electric stove, a convection microwave and optional dishwasher. There’s L-shaped seating to port with a table, and another sofa to starboard. The helm, with seating for two, is forward on the starboard side.

Below, the master stateroom is full-beam amidships, with a centered island berth with an upholstered headboard. Large hull windows on both sides admit lots of natural light, and they have opening ports.

The VIP cabin is all the way forward. It has an island berth with steps on both sides. You also can divide the single bed into two in a scissors-like fashion. The guest stateroom is to starboard, with two double berths.