The Spirit of Ulysses, a Nordhavn 76, is within days of the finish line of its epic 2,000-nm transatlantic voyage from the Canary Islands to Barbados. If conditions hold, the crew now expects to make landfall in Barbados on Sunday morning.

Ulysses, a 2007 Nordhavn with twin 400-hp Detroits, left Lanzarote in the Canary Islands on Dec. 3 and almost immediately ran into some gnarly conditions, including wind gusts up to 53 knots and sea swells from 10 to 15 feet. At first the crew couldn’t even land a Dorado they hooked up, and cooking and eating was problematic.

After a few days things calmed down and they reached Cape Verde on Dec. 9, where they put on 2,260 gallons of fuel (Ulysses holds 4,520), restocked the grocery supply, and changed the impeller in the port engine. 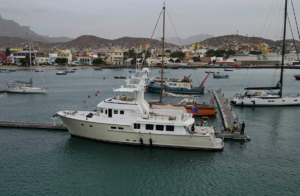 The Atlantic crossing is a dream for Mike Ridgway, who just retired from a computer software job in New Zealand. Ulysses is his first boat, and he hopes this will be the first leg of the start of a global exploration.

Ridgway bought Ulysses last spring in Spain and hired Jordi as his captain. Jordi previously ran a Nordhavn 86 and has lots of experience in ocean passages. They spent the summer cruising the Med to get used to the boat, with stops at Ibiza, Mallorca and Gibraltar. The rest of the crew consists of Ridgway’s friend, Lisa Bryan, and James Leishman and Doug Harlow from Nordhavn.

The weather calmed down after Ulysses left Cape Verde. The crew caught Dorado that they were actually able to cook; Jordi and Leishman even had a ceviche competition. They ran Ulysses at 8.5 knots, and were able to relax in the pilothouse to watch the sun go down. See the picture above, with, from left, Captain Jordi, Lisa Bryan, James Leishman and Mike Ridgway; Doug Harlow is behind the camera. “Life is good,” said Lisa. 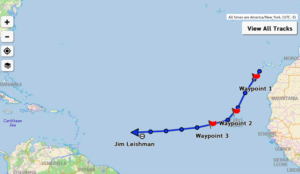 You can follow along for daily updates and Q&S sessions with the crew using the link below: