The 24-foot, electric-powered, foiling RaceBird certainly doesn’t qualify as one of the cruising boats that we usually cover, but I think it illustrates the growing interest in electric boats around the world.

The RaceBird is now being built at Victory Marine in the UK. It was designed by SeaBird Technologies and has partnerships with Mercury Racing for its propulsion system and Simrad and Navico for its electronics.

A prototype of the boat was introduced at Monaco this fall, launched by the founders of the new E1 racing circuit; that’s similar to the Formula 1 circuit for cars but this is for electric boats. The E1 Series will have up to a dozen teams, all using RaceBirds, racing in 10 cities around the world in 2023. Monaco has already signed on for a race.

The RaceBird, with an electric outboard motor, an enclosed safety canopy and hydrofoil technology, will have a top speed of 50 knots. It’s powered by a 35kWh battery from Kreisel Electric, an Austrian company that’s a leader in innovative battery technology, and a motor with a 150kW peak power output. It will ride above the water on its foils for minimum drag and resistance. 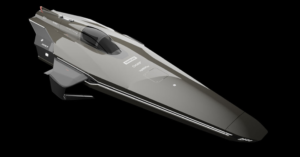 The boat certainly has head-turning lines; with its long nose and foiling wings it looks like something from a Star Wars movie. The engineers from Mercury, SeaBird Technology and Victory are now working on the powertrain and how it will fit into the RaceBird’s hull platform.

“The electrification journey is quickly taking hold in the boating industry,” said Knut Frostad, the CEO of Navico, “and we believe the E1 Series is a perfect platform to raise the bar around innovation and encourage action in marine conservation and sustainability.” Read more: