Princess is launching a new X80 Superfly luxury cruiser, the second in its Superfly series and modeled after the earlier X95 flagship that has been well received.

The X80 has all the same lines as the 95, and it was designed by Princess, Olesinski Design and Peninfarina, creating a yacht with lots of volume inside and some innovations that make it stand out on its own.

First is what Princess calls the “super flybridge” that it says provides 30 percent more space than that found on other yachts of its size. The yacht’s only helm station is up there, and then a sky lounge leads out to an aft deck with a dinette, wet bar and lounge seating. Side doors provide access to a raised sun lounge area on the same deck, forward of the helm station. 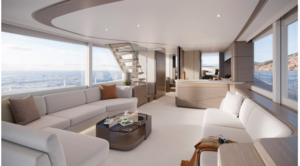 The main deck (pictured above) also is unusual also. Since there is no helm station there, the living and entertaining space extends all the way forward to the windshield. Glazing on three sides admits an unusual amount of light for the salon, galley and forward dining area.

The standard layout calls for four staterooms below, all with en suite heads and showers. The master stateroom is full-beam amidships, with one guest stateroom forward, a double guest cabin to starboard and a twin cabin to port.

But an optional layout positions the owner’s stateroom on the main deck, all the way forward, with access to a private sundeck via the floor-to-ceiling doors on the port side. In that case, an additional cabin can be added below.

Standard power comes from twin 1,650-hp MAN diesels, with 1,900-hp MANs as options, providing a top speed of 31 knots. Another option is a 2,324-gallon fuel tank for long-range voyaging.