Arksen, the innovative British builder, just announced that it’s working on a new 65 world cruiser with a 3,000 nm range.

The Arksen 65 is the third in the company’s explorer line, with an outboard-powered 45 built last year, followed by an 85. The new 65 is designed for an owner-operator to go anywhere in the world.

“This vessel is designed to stand out from the crowd, as well as being built for worldwide exploration,” said Dominic Bryne, Arksen’s director of sales and marketing. “We want owners to really make the most of their adventure, wherever they choose to have it.”

The 65 has a low profile, with an air draft of just 12’ 1” so it can slide under a lot of bridges along the waterways and canals of Europe or along the Intracoastal Waterway in the U.S. It has a plumb bow and two decks and it’s being built using a lot of recycled aluminum for light weight and strength. 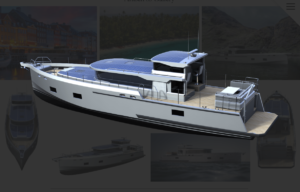 Owners can order it with two or three cabins. In the two-cabin version, there’s space for an owner’s study or a galley on the lower deck. With twin-engine hybrid power, the company says the 65 will have trans-Atlantic range. It also is available with solar array packages.

The salon, with extensive glazing, offers panoramic views and connects to an open galley. The raised helm can be ordered open or enclosed with a wraparound design and 360-degree visibility.

Space on the aft deck can be configured with modular seating for relaxing and entertaining, with an optional large sun shade. It also can be left more open to carry gear for watersports and underwater exploration.

Arksen offers its owners membership in the Arksen Explorers’ Club, which designs new adventures and cruises and provides access to a worldwide network of experts ranging from dive and ski guides to customs agent and shipyards. It manages crew services and vessel management. It even has a concierge service to make travel arrangements, buy show tickets and book restaurants. Read more: