Cape Island Cruisers, a new builder in Nova Scotia, has launched hull number one of its Cape Sable 38 line, a no-frills, fuel-efficient, ocean-going vessel based on the area’s commercial workboat heritage.

The company says the Cape Sable 38 is “an ocean-friendly motorboat for cruising couples.” It certainly seems to live up to that billing, but it also could serve well as a liveaboard or a platform to take on the Great Loop or almost any other voyage.

The first boat, named Stanley, is powered by a fuel-efficient 110-hp, four-cylinder turbocharged and intercooled Yanmar common rail diesel. The company says it has a range of almost 1,000 nm, certainly enough to cruise to Bermuda, say, or head down the east coast to Key West, with a fuel stop in Charleston. Nice.

The Cape Sable 38 is a user-friendly, easy-maintenance boat with a low profile, long sheerline and slightly rounded cabin top (holding two 200-watt solar panels). The cockpit is large and open, with U-shaped seating on the starboard side. 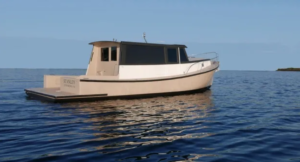 The salon is straightforward, with the galley to starboard, a U-shaped settee to port, with a high-low table so it can serve as an extra berth. The helm has a single captain’s chair, with another on the port side.

Below, the master cabin is forward, with a smaller cabin to port, opposite the head and shower.

Cape Island Cruisers, located in East LaHave, just below Lunenburg, is not going to challenge the major boat builders. Brunswick is safe; Sabre doesn’t have to worry. But they are producing an interesting boat, notable for its blue-water heritage and its no-frills approach. The company hopes to ramp up production to four boats a year.