It’s probably a bit overpowered for the Great Loop, but if you want to cruise from, say, Greenwich to Newport for lunch, or Miami to Bimini in an hour or so, riding in style and comfort, then the luxurious new AB Superfast 100 may be a good bet.

The new Superfast 100 also can stop in its own length (although I’d hate to think about the wake involved), and turn like a Ferrari (that would be more fun) because of its water jet drives. AB Yachts, in Viareggio, Italy, has used only water jets ever since it started in 1992. The company prefers them for their maneuverability and because they offer low draft. The new 100 draws only 4’ 3”, making a fast trip to the Bahamas even more appealing.

The jets on the new 100 are from Sweden’s Marine Jet Power. A single joystick controls all of them; they have steerable outer units and a fixed central thruster.

The sleek, low-slung AB Superfast has a slippery semi-displacement hull, made with vacuum-bagged fiberglass and carbon-fiber reinforcements. It’s made for speed as well as for fun in the sun; indeed, there are sunning areas on the large aft deck (with an almost full-width sofa and sun pad), the foredeck, and up top on the flybridge. 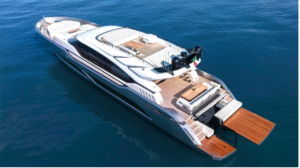 The swim platform and beach club provide easy access to water sports, and the center section of the platform can be raised via hydraulics to reveal the garage (and serve as a diving board).

Huge glass doors fold open to connect the aft deck to the salon, and there’s no partition between the salon and the helm. The entire area is open, and all on one level; the salon windows stretch almost from the sole to the ceiling.

The galley is below, with four cabins. The master is full-beam amidships.