Sabre just launched its brand-new 43 Salon Express, a classic Sabre with Downeast lines outside and state-of-the-art power and high-tech networking inside.

To introduce it latest cruiser, Sabre held an open house for dealers and customers in Portland, Maine, not far from the Sabre factory. My Cruising Odyssey partner, George Day, was there, and reported back that the 43 has everything you’d expect in a new Sabre, while “the fit and finish of hull number one are impeccable.”

The new 43 is designed for a couple or a small family, and it can handle everything from cocktail cruises around the harbor to a multi-week voyage down the ICW or a much longer journey around the Great Loop. The air draft is just 13’ 5”, so it will be able to slide under a lot of bridges along the way.

Standard power is twin 380-hp Volvo IPS500 pod drives, producing a top speed of about 27 knots. (Options include 440-hp IPS600s, and 480-hp IPS650s; hull number one has the IPS600s.) The IPS system comes with Interceptor trim tabs, Volvo’s Dynamic Positioning System, and Volvo’s joystick built into the armrest of the captain’s Stidd helm chair. The hull has a 15-degree deadrise at the transom, so the ride will be comfortable throughout the speed range.

The 43, which replaces Sabre’s popular 42, is the first Sabre under 58 feet with a complete networked system on board. This means owners can check critical functions and control any circuit on the boat from the multi-function displays at the helm or from the iPad Minis in their hands.

The new 43 is laid out like a typical Sabre (the fleet now ranges from 38 to 58 feet). The swim platform is large, the side decks are wide and safe (with good rails for both hands), the foredeck is large with lockers on either side of the windlass to hold lines and fenders. The boat’s sheer line is long and clean; the profile is low. This is a Maine-built cruising boat that will draw attention now, while its looks will never go out of style in the future.

The aft cockpit has a bench seat facing a teak table. Two aft-facing chairs are built-in forward, and there’s engine access via a large hatch in the cockpit sole. 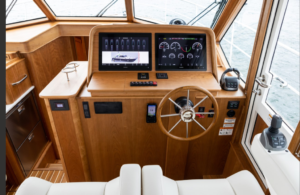 The salon has six-foot-long settees on both sides, with a handsome table on the starboard side. Large windows all around offer panoramic views. The helm is raised, with excellent visibility; there’s a second Stidd chair next to the captain. A door opens on the starboard side so the captain can step out to help manage dock lines. The helm has two large Garmin screens and a Garmin autopilot. The wheel is teak.

Two steps down to port lead to the galley, which is fully equipped for cruising, with white Corian counters, a sink, fridge, stove top and microwave. Down two more steps is the dinette, with room for three or four people. (You also could use this space as a lounge or even an office space.) The back of the aft bench folds down to create a double berth tucked under the helm. The head is to port.

Forward, the master cabin is large with an island double bed. The cabin has cherry ceilings, a large hanging locker, storage under the bed, and a bureau with three drawers. It also has private access to the head.

Because of the IPS system aft, there’s space under the salon sole for a utility room. You can use this for storage (a lot), or for appliances. Sabre says you can mount a washer and dryer side by side. You also can have a wine cooler down there; whatever.