The new RYCK, named after the river that flows from the Hanse yard in Greifswald to the Baltic, can hold eight people and tops out at about 40 knots when powered with a 300-hp Mercury Verado outboard.

It was designed by Bill Dixon, the British naval architect who has developed leading power- and sail-boats for many years. For its part, Hanse is one of the world’s largest boat manufacturers, building Hanse, Dehler and Moody brands for sail and Fjord, Sealine and now RYCK for power. It also makes Privilege cats, both power and sail. 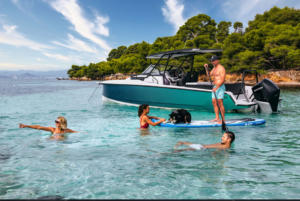 The idea behind RYCK was to create a trailerable, all-around boat that is fun, safe and highly maneuverable. It also is customizable; indeed, Hanse is offering the boat with six different configurations, including one with a double bed, full-sized head and even a hanging locker below.

The new RYCK will make its official debut at the Cannes Yachting Festival, starting Sept. 6, but it’s already being sold in the U.S. Indeed, McMichael Yacht Brokers in Mamaroneck, New York, delivered one to a new owner last week, and has sold two more.

The RYCK 280 has a walkaround deck and a high freeboard for safety on board. The cockpit and wheelhouse are all one level. The cockpit has a standard L-bench seat; the backrest folds to serve as a sun lounge. A table, fridge, wet bar and grill are optional. A large sun pad is on the foredeck.

A large and sturdy T-Top covers the helm deck; two more awnings can be extended to provide shade for the cockpit as well. There are two seats at the helm, which is large enough to house two 12-inch chart-plotters.