You are at:Home»Cruising Life»Freya, the Walrus, Sinking Boats in Oslo

Freya, a  1,300-pound young walrus, is at it again, climbing on boats in Northern Europe to rest and sunbathe, often sinking them in the process.

Freya is now in Oslo, where she has become something of a celebrity, and the media have named her after the Norse goddess of love.

The Norwegian Broadcasting Corporation says Freya was first sighted in the northern section of Norway in 2019, climbing on boats. Since then, she’s been seen in the UK, Netherlands, Denmark and Sweden.

Last year she was found sleeping on a Dutch submarine in a naval base in the north of Holland. Ironically, it was a walrus-class sub. 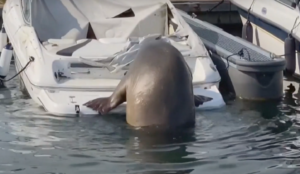 It seems that Freya’s now spending a summer vacation in Oslo, where people gather to watch her from the city jetty. Marine scientists say that moored boats might remind her of Arctic ice floes in her native habitat, and that she may climb up on them to rest and digest her food.

Norway’s Directorate of Fisheries issued a statement saying that Freya is in good health, and can stay where she is, but they said people should keep their distance. Freya, it said, “is not necessarily as slow and clumsy as one might think when she is resting.”

Meanwhile, boat owners are less than happy with Freya’s resting places. Insurance companies, it turns out, are reluctant to pay for walrus-caused damages. Read more at https://www.bbc.com/news/world-europe-62303866 and see the video below: