You are at:Home»Boat Reviews»HMY and Two Oceans Launch Outboard Cruisers

HMY is one of the largest yacht brokers and dealers in the U.S., with offices in Florida and South Carolina. Two Oceans is a long-time builder of blue-water catamarans in Cape Town, South Africa. The two companies joined forces last year to introduce a line of power cats to the U.S.

The new express cruisers are the ECLIPSE 505 (pictured at top and below) and ECLIPSE 605. They are designed by Michael Peters, one of the most prolific designers in the U.S., with offices in Sarasota. Peters has designed everything from superyachts to tenders, and recently has designed new yachts for Outback, Summit (Kadey-Krogen), and Hinckley, among many others. 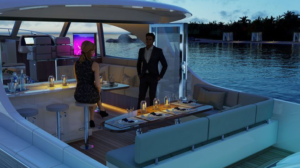 The new ECLIPSE models have Peters’ high-performance SVVT hull, with a 22.5-degree deadrise at the transom. The 505 is a two-stateroom, two-head express, powered by three 600-hp Mercury outboards. The 605 is a three-stateroom, three-head express, powered by four 600-hp Mercury outboards. The emphasis is on seakeeping abilities, performance and comfort on board.

HMY says the new models will use only the finest materials and equipment, and they will be built to custom-yacht levels with lots of attention to details. They will have a flush deck, surround-view cameras, and Seakeeper gyro stabilizers.

HMY will be the exclusive dealer for ECLIPSE in the U.S. Dave Jirikovic will be the brand manager there; he worked with Two Oceans on the earlier introduction of the power cats.