Bluegame just announced that it’s building a new line of luxury multihull yachts, called BGM, that will start with a highly creative 75 and include Volvo’s hybrid diesel-electric powertrain.

Bluegame, part of Italy’s Sanlorenzo Group, unveiled plans for the new BGM75 at the Cannes Yachting Festival; the boat is scheduled to be ready for the same event next September. It was designed by Philippe Briand, the London-based, performance-oriented naval architect. The idea was to create the space and efficiency of a multihull with the style of a monohull.

The BGM75 has a relatively narrow beam for a 75-foot power cat, just 26’ 7”, that the company says makes it more seaworthy. It also has deeper decks connecting the two hulls, resulting in more space for staterooms below. In fact, the master stateroom is full beam forward, spanning the width of the hulls, instead of being limited to just one hull as is the case in most power cats today. 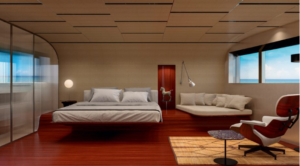 The cat has a reverse angle windshield, vertical side windows, and an open plan for the salon with visibility all around. Protected side walkways lead to a huge lounge on the foredeck, and an even larger beach club area aft with fold-down decks on each side. The garage is large enough for a 13-foot RIB.

The flybridge is unusual in that it too has an open plan. You can even walk around the centered helm station. The hard top has enough room for solar panels to deliver 5kW to run the boat’s electronics. 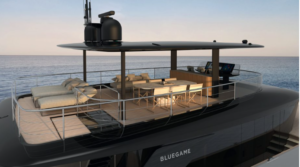 BGM uses carbon in the hull and lightweight materials in all the cat’s non-structural parts to keep the weight down and maximize the boat’s efficiency.

Read more at http://bluegame.it and see the video below: