Nimbus, the fast-growing Swedish builder, has launched its new Commuter 8, a 26-foot, single-outboard boat that’s made for year-round cruising.

The new C8 is the third, and smallest, entry in Nimbus’ Commuter fleet, after the C9 (30 feet) and C11 (40 feet). Jonas Göthberg, the Nimbus commercial director, said “With the C8, we reach a broader audience, partly because it has a lower price tag, but also because of its smaller size.” The C8, he said, can fit into snug harbors where larger boats might not fit, and it also can be trailered.

The C8 is powered by a single 250-hp Mercury Verado outboard, with a comfortable cruising speed from 20 to 35 knots, and a top speed of more than 40 knots. A 300-hp Verado is an option. The hull has a sharp entry to cut through a chop easily; the boat is meant to be a pocket commuter/cruiser that an owner can rely on even in less-than-ideal conditions. 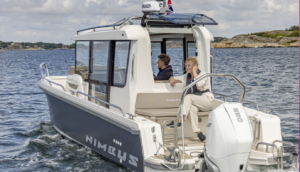 The boat is designed for day trips or overnights. There’s room for a double bed, a separate head and even a kitchenette in the forward cabin, and the sofa in the salon can be converted to an extra bed for one adult or two children.

The two forward seats in the salon can be turned to face the passenger settee and table in the salon. The helm has a 9-inch Simrad plotter, and sliding glass doors open to the side decks; the C8 has a safe, walkaround design. A sliding glass hatch overhead and a large glass hatch aft can be opened for ventilation, or closed for comfort, in a matter of seconds.

The cockpit has benches on both sides and a folding sofa aft that can seat four or five people. And there are built in supports on the cabin top to hold SUPs, kayaks or other water toys. The foredeck has seating that can be transformed into a lounge.