The flagship of Azimut’s Magellano fleet, the sophisticated new 30M is designed as a comfortable and luxurious long-range cruiser.

The Magellano line was started back in 2007 by Azimut founder Paolo Vitelli, who wanted a boat that had the range of a traditional displacement trawler but with more speed and, of course, some Italian design flair. The line now includes the 60-foot-long Magellano 60 and the 82-foot long Magellano 25M.

The new 30M has what the company calls a second generation Dual Mode hull that provides an easy ride at both displacement and planing speeds. It tops out at 20 knots with the standard twin 1,550-hp MAN diesels, and 24 knots with optional 1,900-hp MANs.

The hull and exterior was designed by Ken Freivokh and the interior by Vincenzo De Cotiis. The new Magellano has striking high bulwarks, a sleek superstructure, a vertical bow, and lots of glazed surfaces. Indeed, the yacht has more than 750 square feet of glass.

Azimut says you can sit almost anywhere on the yacht and still have views outside. Furnishings in the salon are built at half height, so they don’t obstruct the views; Azimut’s engineers created a low-profile ventilation system for the same reason. Looking aft the from salon, the Magellano has an “infinity terrace” with a glass parapet so the views can go on forever. 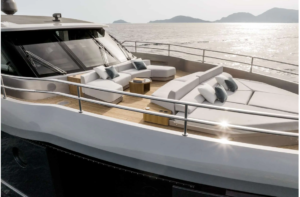 The foredeck is sleek and massive and built for relaxing and entertaining. The single helm station is on the upper deck, so the salon on the main deck is open and flooded with light. The full-beam owner’s suite is forward on the main deck. You enter it via a private lobby with marble-framed portholes. It has a vanity/deck, and a smoked-glass door to the luxurious en suite head.

Two VIP suites and two guest cabins are on the lower accommodations deck. Crew quarters are forward, and connect directly to the galley.

A stairway leads from the main deck up to the interior sky lounge. The wheelhouse is forward, and doors aft lead to a terrace with a dining area, bar and sun lounges.