You are at:Home»Boat Reviews»New Xquisite 40 Cat To Debut in Miami

Based in Cape Town, South Africa, Xquisite was started in 2014 with the goal of building sail and power cats “for adventurers who wish to explore our oceans without giving up their lifestyle.” Xquisite sailing cats have won a number of prizes in the past few years. The company previously announced a 60 Solar Power Cat, and now is introducing the 40, which will be built in Portugal.

The new Xquisite was designed in collaboration with Dixon Yacht Design to create a cruiser to spend weekends, or many weeks, exploring the Bahamas or the Florida Keys. Its low draft of just 2′ 8″ and its outboard power make it a natural for the skinny waters there.

The Xquisite 40 is marked by a clean design, with a hardtop covering the helm deck and bulwarks that fold out from the sides on the aft deck. The aft deck can be protected overhead by an electric shade and awning, and it  has an electric grill, fridge and ice-maker for entertaining; there’s even a pop-up TV. 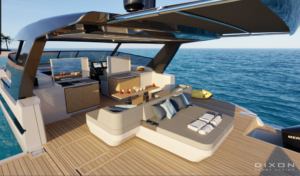 The boat is offered with both inboard and outboard power. In the outboard version, there’s an extension of the aft deck between the two outboards, with a teak swim ladder.

The foredeck has large sun lounges over each hull. A ladder folds down from the starboard side so you can climb down onto a beach for picnic or exploring, while a hydraulic folding anchor system is on the port bow.

Solar panels can be integrated into the hardtop, while air conditioning is available for the helm deck and the interiors. The 40 has two cabins, one in each hull below, each with an en suite head and separate shower. Windows along the hull sides let in lots of natural light.

An electric propulsion package, either inboard or outboard, is an option. The outboard power options run from two 300-hp engines to two 425-hp engines, with a top speed from 30 to 38 knots.