The Ferretti Group is holding the world premiere of its new Ferretti 580 at the big Düsseldorf show that runs from January 21 through 29.

The new 580 has more sporty and sculpted lines than many previous Ferrettis, with a nod to its Italian roots, particularly in the interior décor. The exterior is by Filippo Salvetti, who now has designed six yachts for Ferretti, and the interior is by Ideaeitalia, the Italian design firm that’s also worked on other Ferrettis.

The yacht manages to achieve a clean, forward-looking profile, with the flybridge set well aft and its hard top so far aft that it doesn’t interfere with the yacht’s overall lines. On the flybridge, the helm is set aft, behind a luxurious sun pad (a design element that definitely puts style over function).

Ferretti offers lots of customization on the new 580. You can order it with three cabins and two or three heads. The owner’s stateroom is full-beam amidships; the VIP is a double cabin forward, and a twin cabin is in between. In the two-head layout, the owner’s stateroom has a raised study area to replace the third head.

The yacht also has two choices for the interior furnishings on the main and lower decks, offering a mix of fine wood and fabrics. The Classic version has a warm, earthy look, according to the company, while the Contemporary version is marked by glowing woods and fabrics in fresh colors. 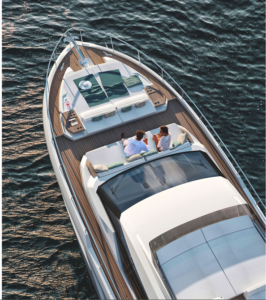 One notable feature is the foredeck, with a large, luxurious bench seat set under the highly slanted windshield, and then a pair of opposing sofas and a walkaround sun pad and side tables forward; the entire area seems to float above the teak deck on hidden supports.