You are at:Home»Boat Reviews»New Cruisers Cantius 60: Big, Fast and Comfortable 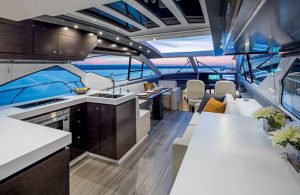 The new Cruisers Cantius 60, with its low, Euro-style profile and its raked windshield, is a large, three-stateroom cruiser that’s filled with light and cruising amenities. It also delivers a 33-knot top speed with Volvo’s IPS pod drives and joystick controls.

The Cantius 60, along with a 60 flybridge, are the flagships of the Cruisers line. Built at the Cruisers’ factory in Oconto, Wisconsin, the Cantius takes advantage of some current trends, including its coupe-style design, the same-level walkway all the way from the transom to the helm, and a large (7 feet long) opening sunroof to let in even more light to the salon, which already is filled with natural light from large side windows.

You can walk on the boat via the wide swim platform or boarding doors farther forward on each side. The hydraulic swim platform can be submerged, and it’s large enough to hold a RIB or a PWC. It also offers access to the Cantius’ garage.

The cockpit is a major social area, with a U-shaped dinette aft, facing a table on two pedestals. The table can be lowered to create a large sun lounge there. The cockpit also has a grill, fridge, ice maker and bar stools; a second IPS control station there is optional.

Glass doors lead into the salon, where the large U-shaped galley is aft on the port side. You can lower a window there to open directly to the cockpit. There’s a settee opposite the galley, to starboard, and another one forward, to port. The helm station has two STIDD helm chairs.

Below, the master stateroom is full-beam amidships, and it’s bathed in light from large windows built into each hull side. It has a centerline king bed and lots of space all around, including 7-foot headroom. The master head has an enclosed shower with frosted glass walls on both sides.

The VIP stateroom is forward, with a queen berth, a walk-in closet, lots of storage and an en suite head with a separate stall shower. The third cabin is just a bit aft on the starboard side with an accordion door. A lower berth there pulls out to convert to a double bed.

The foredeck is another social area, with a five-person seat at the base of the windshield and a pair of sun pads forward. They have hinged backs so they can be used as sun lounges.

For cruising people, it’s worth noting that the bridge clearance on the Cantius 60 is 16’ 9” to the top of the mast light. That’s a very reasonable air draft for a 60-foot boat, particularly for anyone considering the Great Loop or cruising in Florida.