You are at:Home»Ft Lauderdale Boat Show»FLIBS Opens on Wave of Enthusiasm

The iconic Fort Lauderdale International Boat Show, the largest in-the-water show in the United States, is underway, riding a wave of enthusiasm and pent-up demand. The show officially has 647 exhibitors and 712 boats, from Absolute to Zeelander; the largest is a 252-foot Feadship named Boardwalk.

Fort Lauderdale calls itself “the yachting capital of the world,” and the show does not lack for excess. Not all the boats had fenders as large as those on the megayacht in the picture above, or the helicopter on the upper deck, but in Fort Lauderdale it’s just a matter of scale.

The show also does not lack the other signs of affluence that go along with large yachts, including a variety of Ferraris, Bentley convertibles and more helicopters, personal submarines and assorted other water toys dotting the shoreline and waterfront displays.

A sign of the times: Tickets to the show’s Windward Club, with an open bar and concierge service, were sold out before the show even opened. They cost $300 each; a regular ticket costs $37. 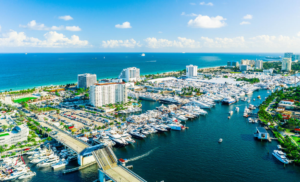 At Fort Lauderdale, and the other shows earlier this fall, boat owners and buyers were showing an enthusiasm borne of pent-up demand created by the Covid pandemic. Since the pandemic began, and social distancing entered everyone’s day-to-day conversation, the boating business has taken off.

As a result, new boats are hard to find, even at boat shows. Good brokerage boats are even harder. At an earlier show, a dealer for one of the most well-known cruising yacht brands told me that his builder was sold out for the next three years for its most popular model. He had a new buyer for one, but he had to persuade the buyer to consider a brokerage boat first, and then trade it in three years down the road. Now that takes some selling. It also means the dealer had to find a suitable brokerage boat when inventories are depleted, if not non-existent.

The lack of inventory is hurting even the big guys. MarineMax, the largest boat retailer in the world with 77 dealerships, reported its fourth quarter and fiscal year earnings earlier this week. The good news is that revenue for the year was up 37 percent, to $2.06 billion, the highest return in the company’s history. The troubling news is that same-store sales for the fourth quarter, ending Sept. 30, were down 7 percent – because of the lack of inventory. With the shortages, prices, of both new and brokerage boats, are climbing higher and higher.

Making matters worse, the world-wide supply chain has been disrupted, with container ships stacking up in ports along the Atlantic and Pacific coasts. Earlier this week, the head of a large shipping company predicted that “containergeddon” would last a long time. New microchips, necessary for everything from boat engines to marine electronics to a lot of the now almost-mandatory high-tech accessories on high-end cruising boats, are among many of the things not getting to their destinations.

In Fort Lauderdale, meanwhile, the parties, the demos, the meetings and the selling, all are taking on a life of their own. People who already own boats always want to see what’s next, and they always can use new electronics or gear or even new engines, if it’s time to repower. And people who don’t own boats (yet), want to get in on the fun.